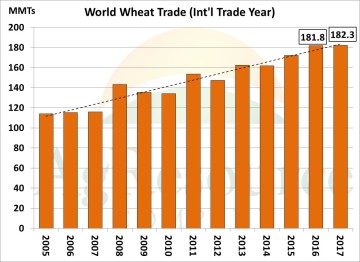 The world wheat market lacks a major demand driver, as evidenced by the path of global trade in recent years. The USDA in its August report projects total world wheat trade in 2017/18 to total 182.3 MMTs, which matches the longer term trend and which is just 500,000 MTs (0.2%) above 2016. The USDA nearly always underestimates world wheat trade in its August report (by 12 MMTs in 2016 and 17 MMTs in 2015), but it will take time before that can be fully assessed. However, ARC does have some disagreement with the world trade matrix, and via current production issues, certain logistical constraints, and world fob prices spreads, some fairly sizeable changes lie ahead  – and the US is expected to capture a higher percent of global wheat trade than is currently forecast. 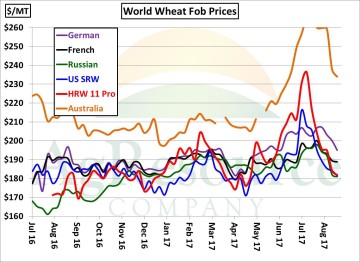 The USDA currently assumes fairly normal trade flows or that each major exporting country will export a near-average share of what it normally does. However, in some cases this is difficult to reconcile with current price spread. For example, Australia, which continues to labor under severe dryness, is projected to export 22 MMTs of wheat, unchanged from the prior year. However, Aussie production is expected to erode and notice in the graphic that Australian fob offers are far from competitive – holding a $40/MT premium to EU origin and a massive $55/MT to Russian wheat. Australian exports will struggle outside of captive markets. EU wheat, too, is no longer competitive with Russian and US wheat, while the USDA projects EU exports to rise 2.5 MMTs in 2017/18. The point is that as market share is stripped from Europe, Australia and Canada, it will be rising in the Black Sea and US. The Black Sea and US are competing to be the world’s low cost suppliers. 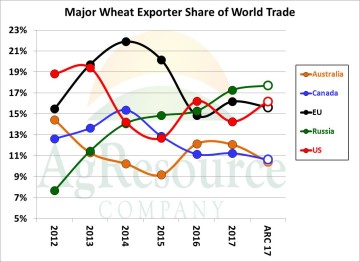 And so the US wheat market is firmly positioned to boost in export demand in spite of lackluster global trade growth. Russia not surprisingly will be the world’s top exporter of wheat, accounting for a record 18% of world trade, but the US will follow not too far behind. The USDA has rightly pushed Russia’s production gain into end stocks, rather than exports.